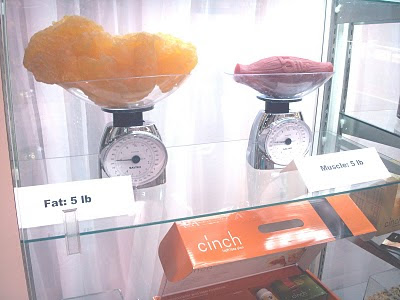 New Study Shows Post-Exercise Protein Increases Muscle Mass and Strength
A new research study showing the benefits of ingesting protein after a workout for increasing muscle mass and strength was published in the May 2008 issue of Fitness Management, (www.fitnessmanagement.com) a publication for the fitness industry.


Study authors Wayne L. Westcott, PhD, William F Martin, PhD, Rita La Rosa Loud, and Susan Stoddard conducted the research at the South Shore YMCA in Quincy, MA. The following is a study summary and the published manuscript will be available shortly on the Shaklee MD Resources website.
Background of the Study
In the last decade, significant research has been published relative to protein supplementation, recovery from exercise, and muscle development. Clinical research demonstrated that a protein-carbohydrate complex consumed immediately after exercise enhanced recovery from exercise when compared to consuming carbohydrate alone. More recent work has shown significantly greater gains in muscle mass and strength when protein is ingested immediately following resistance exercise.
After age 35, adults may lose 3-8 percent of their muscle mass per decade. Evidence suggests that an average muscle loss of 5 pounds per decade is associated with a 3-percent per decade reduction in resting metabolism which can predispose individuals to a dramatic increase in body fat. So it makes sense that strength training programs might be an important factor in weight management. In fact, Dr. Westcott’s previous research has demonstrated the ability of previously sedentary adults to gain muscle and elevate resting metabolic rate which could result in the ability to expend an additional 100 calories per day in a 175 lb individual!
Study Design

This study was undertaken to examine the effects of a 23-week moderate strength training program, with and without the supplemental protein, on body composition in a group of 68 adults. Average age was 59 years and exercise frequency was 2 to 3 days per week. The exercise protocol was adapted from the American College of Sports Medicine guidelines and included standard use of 11 weight training machines with appropriate increases in exercise resistance and post-exercise stretches. Subjects also performed 20 minutes of endurance exercise.
All participants performed the same exercise program in the research facility under close supervision. Forty-six subjects completed the 23-week program; Twenty-four participants consumed the protein drink (Cinch™ Shake, Shaklee Corp., Pleasanton, CA) following their training session and 22 did not consume the drink, nor did they receive a placebo control. The drink was prepared by mixing 1.5 servings in water and provided approximately 270 calories, 4.5g fat, 35g carbohydrate, and 24g protein. No reasons were reported for the 22 subjects that dropped out of the study.
Study Results 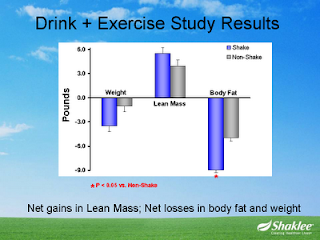 This study confirms the impact of a fitness program for improving body composition and anthropometric measurements. Therefore, it appears that previously sedentary adults can attain significant and consistent muscle gains and fat losses over the first 6 months of a standard exercise program.


Another finding was the greater body composition improvement seen in the participants who consumed the protein drink immediately after their workout. Subjects who consumed the post-exercise shake gained about 25 percent more lean weight and lost 50 percent more body fat. This observation reconfirms the finding that supplying the body with extra protein and carbohydrate following a combined strength/endurance exercise session promotes addition of lean tissue and loss of body fat. At present, it’s thought that protein ingestion post-exercise increases the rate of muscle proteins synthesis, which increases the amount of muscle over time.
Practical Application

This study confirms that a standard exercise program is effective for increasing lean mass and decreasing fat mass. But it’s even more interesting that consuming a post-exercise protein drink promoted favorable body composition changes (increased lean weight and decreased fat weight) associated with the standard strength/endurance exercise program.
Make strength and endurance exercise part of your regular routine, and enjoy a protein-carbohydrate shake immediately after exercise for faster recovery, to help build and maintain muscle mass, and to decrease fat mass.
~~~~~~~~~~~~~~~
Re: Shaklee Physique and the Elderly


As you know, the nutritional needs of mature individuals are unique. Digestion, muscle mass and hormonal regulation tends to decrease. Body fat and blood cholesterol levels tend to increase. Cardiovascular efficiency, blood sugar regulation and energy levels tend to decrease. This observation seems to be related to the aging process and made us ask the question "Mat factor seems to have the greatest effect on aging?"

After several years of recommending Physique to 210 elderly patients (men and women between 65 and 84) at this clinic we noticed some amazing results that we would like to share with you.

*1) 72% of people over 65 years of age who began using Physique daily had an increase in energy and * more muscle mass after 6 months.

*2) Sugar regulation in those who had been hypoglycemic or hyperglycemic returned to normal in 56% * of the cases within 3 months after starting daily use of Physique.

*3) 60% of all elderly patients following our recommended exercises had less muscle and joint ** symptoms within 3 months after daily use of Physique.

These findings can only suggest that Shaklee Physique is a very useful addition to the nutritional program of the elderly population who are physically active and taking positive steps to maintain their health. When maximizing the diet and regularly supplementing, significant benefits can be gained by the elderly using Physique.

We are very excited about these findings and hope that mature people and not just young people will take advantage of this outstanding product.