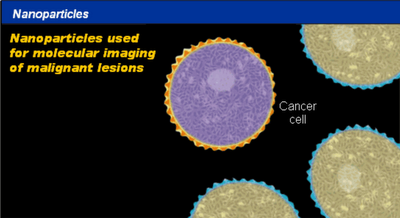 Gold-covered nanoparticles might make cancer cells unable to stand the heat
In the Works - They embed themselves in tumors and bake them to a lethal 108 degrees when activated with an infrared laser. Early testing in mice has been encouraging.

By Amber Dance, Special to the Los Angeles Times
Scientists are turning up the heat on cancer with a one-two punch of radiation plus fever temperatures that could shrink stubborn tumors.

Drugs and radiation can beat back tumors, but some cancer cells usually survive the assault. So researchers at Baylor College of Medicine in Houston fortified their arsenal with gold-covered nanoparticles that embed themselves in tumors and bake them to temperatures of 108 degrees when activated with an infrared laser.

Conventional cancer therapy effects every cell in the body.  Tins new therapy isolates individual cancer cells and destroys them with out damaging other healthy cells.  It is estimated that this therapy will be available within the next five years.

STAY AWAY FROM CHEMOTHERAPY AND RADIATION

For many years it has been known to well informed individuals within the medical community that chemotherapy and radiation were quite toxic and essentially worthless in the management of malignancies. This information is carefully covered up by our controlled media so that these two methods of therapy are regarded by lay persons as the proven therapy for malignancies. Like lemmings going over a cliff the general public lines up for these therapies and nearly all treated persons proceed to die.

To the person who inquires how can an essentially worthless therapy continue to be used as the answer is simple. It is all about money. Chemotherapy drugs bring in more than a trillion dollars annually to the pharmaceutical industry. Oncologists frequently make (actually the number can now be over $50,000 per injection) $1000 from every injection administered to a patient. There are 40 National Cancer Institute Centers scattered across the USA. Each of these employs thousands of employees. Curing cancer would be devastating for the economy and must not be allowed to occur. Research programs whose alleged purpose is to cure cancer see their funds steered into harmless areas where no cancer cures will ever result. Less than 1% of research funds are spent finding methods to prevent the spread of cancer, which is the cause of fatal cancer cachexia which kills 90% of cancer victims.

Preventing unfavorable chemotherapy results from being seen by the public in TV, radio, and newspaper reporting is combined with malicious quackery charges and actual death threats to practitioners who have legitimate cancer cures. I am aware of at least a dozen cancer cures since 1900 that have been ignored or suppressed. Several persons with bonafide cancer cures have been so vilified they died alcoholics or committed suicide. Prominent physician Dr. Milbrook Johnson was fatally poisoned the night before he was scheduled to speak on a national radio network in the 1940s about the ability of Dr. Royal Rife’s electronic equipment to cure cancer and infections.

Both chemotherapy and radiation have such toxic effects on the human body they must be stopped before they kill the patient. In the early days of chemotherapy drugs it was noted that skeptical patients who refused to take chemotherapy usually lived longer than patients treated with chemotherapy. (in the 1940’s research was done that showed the average life expectancy was 4 times longer for those that took no treatment)

Radiation therapy directed toward a bone containing cancer might initially seem innocuous but actually has effects throughout the body. Circulation of blood through areas of ionizing radiation being delivered to bone is able to transport this radiated blood to distant sites where it can injure bone marrow production of killer lymphocytes, red blood cells, macrophages and platelets. Loss of appetite and nausea can also be seen. Conventional radiation to the abdomen and other areas may be followed by permanent injury to the small intestine, liver, pancreas, colon, (diarrhea, pain) and arteriosclerosis of arteries in any field of radiation.

A suspected cancer patient had x-ray films showing numerous lucent identical sized masses overlying brain and spinal cord tissue. The films were misread as metastasis from a prior malignant melanoma instead of echinoccocal cysts spread from the family dogs. Massive radiation of brain and spinal cord tissue caused complete loss of appetite with no food intake and death in 8 days in a previously well 26 year old woman.

What are results of chemotherapy drugs? Associate Professor Graeme Morgan of Australia was the lead researcher on an article titled “The contribution of cytotoxic chemotherapy to 5 year survival in adult malignancies.” This research showed that chemotherapy improved 5 year survival by less than 3% in adults with cancer. In 1987 Dr. Lana Levi of the University of California wrote “most cancer patients in this country die of chemotherapy. It does not eliminate breast, colon, or lung cancer. This fact has been known for over a decade. Women with breast cancer are likely to die faster with chemotherapy than without it.”

Dr. Ralph Moss Ph.D. relates that “Conventional Cancer therapy is so toxic and dehumanizing that I fear it more than I fear death from cancer. Yet most alternative therapies regardless of potential or proven benefit, are outlawed, which forces patients to submit to the failures that we know don’t work because there is no other choice. Dr. Moss was employed as a science writer for Memorial Sloan Kettering Cancer Center in New York. Chemotherapy drugs are cellular poisons so they are quite toxic. They are also quite expensive. In his book The Cancer Industry he documents how the close links between the pharmaceutical industry and the cancer establishment enables an inadequate therapy like chemotherapy to become promoted and established as standard care.”

In a 1995 interview Dr. Moss related that chemotherapy was effective in only 2 to 4 % of all malignancies (Hodgkin ’s disease, Acute Lymphocytic Leukemia, childhood leukemia, testicular cancer and Choriocarcinoma.)

The package inserts for chemotherapy drugs admit that taking a course of chemotherapy drugs can increase your risk of subsequently developing a new cancer by about 10%.. The National Institute for Occupational Safety and Health (NIOSH) warns that the powerful drugs used in chemotherapy can cause cancer in employees who handle them (nurses, pharmacists, cleaning personnel). If continued too long these drugs are fatal. The damage to white blood cells, killer lymphocyte and red blood cell production makes the patient vulnerable to overwhelming (bacterial and fungal) infections which are the cause of death in many patients on chemotherapy and radiation. It never made sense to me why administering toxic substances that cause major side effects could possibly heal a serious illness like a malignancy.

Dr. William Campbell Douglass II, MD “To understand the utter hypocrisy of chemotherapy, consider the following: The McGill Cancer Center in Canada, one of the largest and most prestigious cancer treatment centers in the world, did a study of oncologists to determine how they would respond to a diagnosis of cancer. On the confidential questionnaire, 58 out of 64 doctors said that all chemotherapy programs were unacceptable to them and their family.

In 33 years of conventional medical practice I referred all patients with malignancies to oncologists. The only survivor was a Chinese man with a low grade lung cancer. He responded every five years or so to a few doses of radiation.

In my opinion one of the most important verses in the Bible is Proverbs 14:12 There is way that seems right unto man but its end is the way of death. Drug company owners and executives, politicians, world leaders and media executives have unbelievable wealth and power in this world. However, they face a tortured eternity following death. This seems to be a very unwise tradeoff.

Anyone reading this article has my permission to copy or publish this information. Hopefully, some individuals will be made aware that there are safe effective alternatives to chemotherapy and radiation in the treatment of malignancies.

Dr. James A. Howenstine is a board certified specialist in internal medicine. The Second Edition of his book A Physicians Guide To Natural Health Products That Work is available. Dr. Howenstine can be reached by phoning 001-506-2262-7504.
Posted by Sam and Bunny Sewell at 7:26 PM